Does this involve me?

I emerge from a restless broken sleep to condensation on the inside of the windscreen and see that I am neither too early nor too late. The dawn is still a work in progress. It is a luxury to laze in the back of the van with a mug of tea and bowl of porridge without having to stir from the comfort of my sleeping bag. But I didn’t linger for too long. My life was in chaos and I had not really planned this run. I just had a vague idea that it would be good to park up on my late-night journey home, to close my struggling eyes, and hope that morning would present an opportunity.

My half-ill body was stirred into action, and soon I was trotting along the vale to the bottom of Stannah Gill. Surprised to find some strength in my legs, I bounded over the wooden bridge spanning the idyllic little waterfall. It was like an almost too perfect feature in a grand garden, and I thought that William Wordsworth, with his hankering to be a landscape gardener, would have strongly approved. The steep slope at the south side of the gill was clothed in the tangle of thigh high summer bracken. A thin trod on short grass through the thicket led up, and up, and up. Easy up. Breaking from steep to runnable over the fell’s rounded shoulder I pushed on in the most glorious of quiet mornings. Sticks Pass saddle, flat like a playing field was where I turned right to the main ridge path; a rubbly ribbon stretched out like a seam, stitching together the east and west sides of the Helvellyn hills. I ran over Raise and White side with their carefully built cairns on top, like alters. Places of veneration. 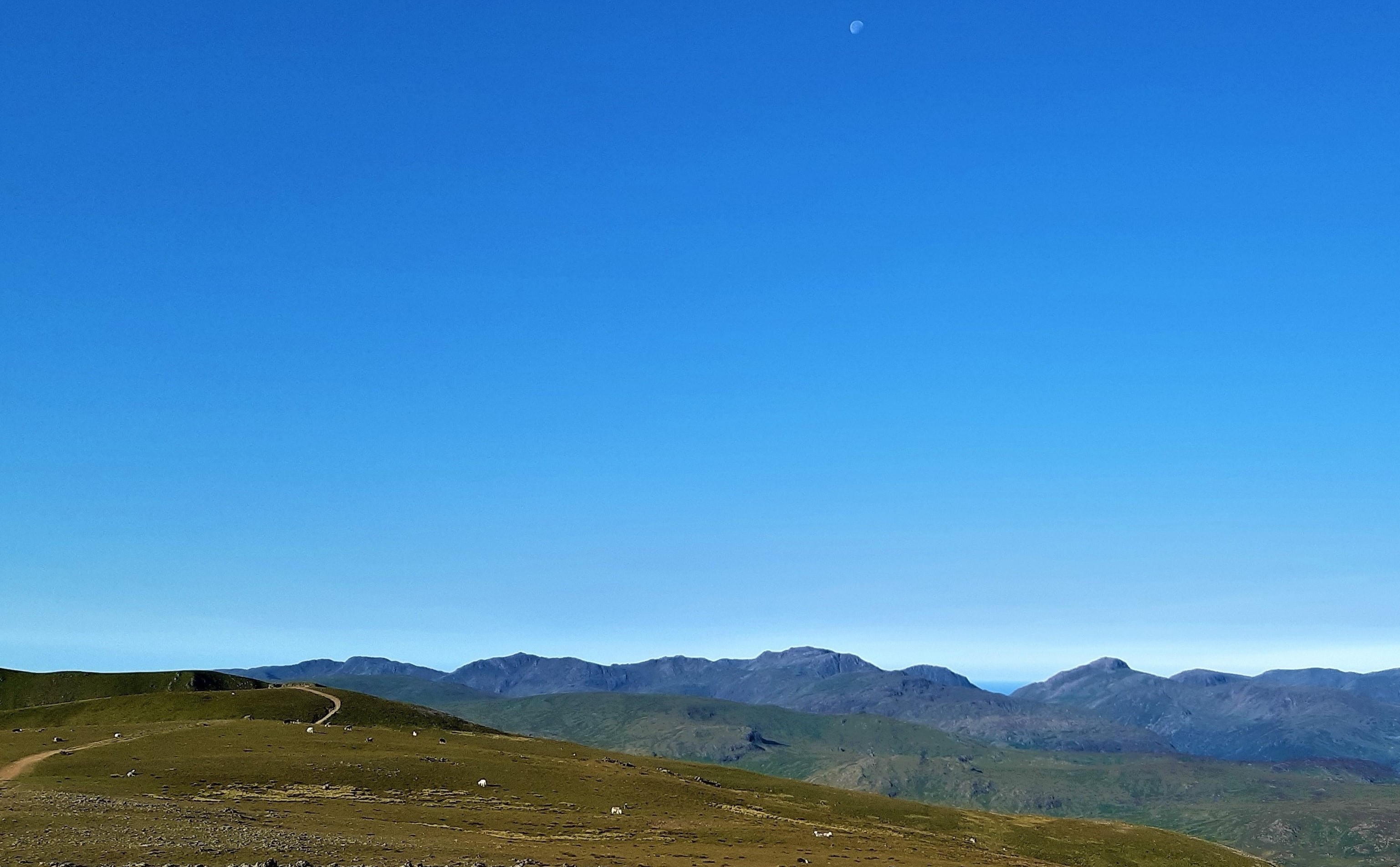 And of all the many remarkable things about the morning the most perfect was the air itself. Cool and still and silent. Like cathedral air but free under a single stain, just blue. There were Herdwicks newly shorn, gawky looking and fleece-less, with funny shaped heads a bit too big for their bony bodies. Perhaps there is, after all, a lot that goes on in a Herdwick’s head. Some say they can recognise three hundred faces. Sheep faces that is. Humans - they all look the same, and mostly behave, – like sheep. There was no foot stamping as I passed them. No bleating, barring, mearing or chowing. They too were silent. I wonder if sheep meditate. There were no twittering larks, no rumbles from the Thirlmere road. Silent, still, green and blue, cool and quenching, easy running. Along the rim above the Red Tarn corrie. Along the rim of the world of deductive, logical thoughts where nothing can really be bottomed. Along the edge of another place where thoughts are just noise that gets in the way of knowing. Irrelevant in the eloquence of spectacular silent mornings. The special time was almost gone as the first human was encountered with a “morning” or was it “Amen”. Ant-like armies of adventurers were appearing from Glenridding, the opposite valley. It is always busy on Striding Edge in summer, but since COVID it feels like the whole world has come to Cumbria. They won’t be on the ridge in the next half hour so I scoot down Swirral then work my ankles and slide on my arse down the mossy wobbly slope, straight to the tarn. Thick tussocks forced a picking up of feet around the unmoving edge of the water, to the outfall where six young men dithered in underpants, preparing for baptism. Only two went in, four were chicken. My legs ran me back up to beginning of Striding Edge where I pulled on the reigns – steady, steady slow…. Too easy to think flying might really be possible. Pick-pluck with feet and hands, and then along to ten steps of free running along a diving board in the sky. Cheeky – because I could. Back on the main summit after my circuit it was 9 a.m., well into ordinary daytime. Run on and on and back the way I’d come and down and down and you wonder how it was so easy, all this way up. Down steep then steeper, the road now busy, men shouldering mountain bikes, gaggles of walkers, business as usual. Office hours on Helvellyn. Back down to where it’s all “Stay Safe” and where everyone’s frightened. Where things should be done but what and by who, and does any of it involve me? None of it involves me. Not like a small rocky foothold above a drop. Not like a too steep to run but do it anyway slope. Not like the silence; the gentle soft silence which gives me everything. None of it involves me like that.