Fights, Fears and Flights of Fancy

A good friend of mine told me a story on the phone last night. As she spoke, I had a feeling, like when hearing a good poem, that I was taking in something profound but that my deductive mind had not yet unravelled its meaning. Sometimes stories or poems hit some kind of target within me and it’s a feeling worth taking note of. I think it happens when something has rung true at a deeper level than any kind of logic or deduction can achieve. Then afterwards, there can be new insights, new lines of thinking and knowing.

My friend was telling me how she went for a walk the other day on the North Pennines with her husband who is a good listener to birds. He can usually tell who is around by their tweets and calls.

“Sounds like a hen harrier” said Chris as he scanned excitedly to site the bird.

But no, on a post they located the source of the screech – a cuckoo under siege, being mobbed by a group of meadow pipits. Brave little warriors trying their best to see off the parasitic threat. They must be aware of cuckoo tactics. Like a big hungry capitalist, the cuckoo doesn’t do its own work but seeks out a surrogate home for its investments and relies on the little birds to hatch them and feed them. It can even lay its egg in another bird’s nest in colours which mimic the eggs of the chosen hapless host. But the little birds were trying to see it off before it counterfeited their families. And as my friend was detailing the scene I was thinking; “Good on you little pipits, don’t be exploited – you don’t have to slave away for the benefit of dishonest fat cuckoos”.

My friends continued on their walk and ran into the local gamekeeper and stopped for a chat telling him about the birds. But he had seen it all before and with a fatalistic confidence he said;

“Yes, and you should come back on the same walk in three or four weeks. I’ll bet you’ll see a great big cuckoo chick on the same post being furiously fed by the same little birds.”

I don’t know exactly what I found so moving about the tale. It wasn’t simply the unfairness. I didn’t just feel sad and sorry that the little birds are being cheated, I felt questioned by them. I had an instant feeling that the story was asking something of me.

I wondered whether, in my own life, I am like the little pipits. Do I allow my little creative eggs to be subtly replaced by bigger and greedier offspring from elsewhere?

Do I attend to the things which I assume are my own agendas when in truth they have been planted by the society that weighs wealth in terms of status, money, and measurable achievement?

I love fell running but sometimes I will run when I need to rest, and pander to my perceived need for fitness in order to compete or complete big challenges. Is this healthy stretch or an example of feeding a type of greedy external agenda?

I love reading and writing poetry but if I try to get stuff published or enter a competition am I feeding something unwholesome above my own creative integrity?

Perhaps those little birds are driven by an instinct to put food into clamouring empty beaks no matter if they are cuckoos. And maybe they even get some satisfaction from carrying out their work of filling any open mouth with nourishment. And then there is also the Mafia hypothesis, which proposes that the little birds are frightened that if they don’t nurture the cuckoos, then big gangs of the greedy marauders will come and trash their nests entirely, and put paid to any chance or rearing an egg of their own. Do they do it from fear or habit or both?

I don’t think there is an answer to my friend’s story except to acknowledge it could be worthwhile to keep being a little suspicious of the things I choose to expend my energies on. Are they really mine? How much does that matter?

But now let’s move on from Cuckoos. I'll tell you about a different sort of bird encounter, this time one of my own. After visiting Catalunya a few times in autumn time for climbing, we came to love the vultures and the climbing became a communion with these sky dwelling giants. I wrote a little piece to honour these birds, just because we loved them. You might think a vulture to be threatening than a cuckoo - but if so I would disagree. 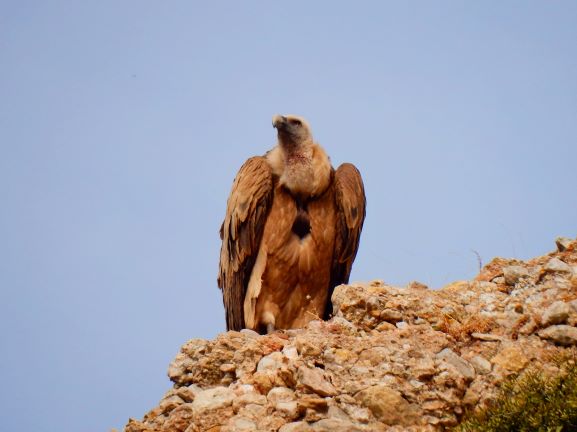 We have arrived under an unreasonably blue Spanish sky. Expectant – we know you’ll be there. Excited – there you are! Huge wardrobe doors aloft in flight. Something in our hearts relaxes under your presence. You make us feel alright, brown friends, soaring in your congregation.

Swooping behind us, as we climb high cliffs hearing your feather-fluttered air at our backs. Your eyes on us as you tilt to take us in, so close you must hear our half-held breath. We all came on purpose to this meeting in the sky.

And once we’re up and free to turn, you glide in a minute to a valley perch it will take us yet hours to reach. We are not mocked. You are too big, and brown, and beautiful to be weighed down by self-indulgence.