"Maybe I Will, Maybe I Can."  (quote fromfrom Running the Red Line, The Lakeland Classics Chapter)

This is a dangerous piece of writing. It is the first time I have been so bold as to write about something I haven’t even done yet. Usually, I like to reflect on things afterwards, and since my plans often end in complete none-events, prior musings have the potential to be terrible embarrassments.

I might regret telling you this but it all started in the queue for the veterans’ COVID-19 vaccination. Just two days earlier a friend had asked me if I had entered the Ennerdale Fell Race, scheduled for June 12th. It is this summer’s big event. Who cares if Glastonbury is off – Ennerdale is on! My answer then was an honest, heartfelt, certain and sure “No. I am definitely not doing it”. But it seems this vaccination can have terrible side effects when the other people in the queue are all seasoned fell runners and they start up with their dangerous persuasive talk. I was still resolute,

“No, I’m not doing it, and anyway it’s too late, the entries are all taken”.

“Yes, but more will be released on Monday morning, come on, it’ll be great”.

I thought I had got away with the promise of just a recce, but the vaccine must have got into my brain. Perhaps the Fell Running Association had implanted a microchip in it which causes innocent people to sign up for humungous feats. Ennerdale – 23 miles and 7500 feet of up and down – I can’t do it, I’m too broken, I’ve been too ill, I’m too weak, too knackered, too scared. But now look – I’ve entered! 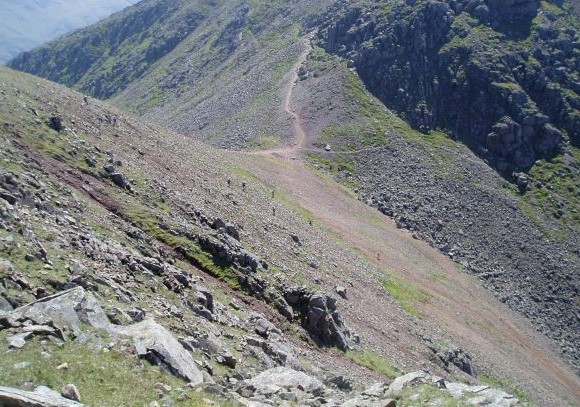 Competitors coming off Green Gable on a previous Ennerdale Race

Then last Thursday I was sitting alone in the Ennerdale car park. Our old house is less than a mile away. This was the place it had all started. All this crazy fell running. This was the place that gave me comfort when in 2005 I returned from the Alps where our friend Kit had died right next to me, in shocking accident. When that happened, I knew that none of us, Kit’s close friends, would ever be the same. And it was during that terrible grief-stricken time that fell running showed me how to live with the pain of life. And it was on these fells, the Ennerdale fells, that I spent days alone running myself back into the world. Sunny evenings catching the last light on Red Pike. Winter ice-bound days slithering over the rocky slopes of Pillar, finding ways of staying on my feet, finding ways of keeping going.

And it was these fells where a few years later, when I had morphed into someone resembling a runner, that I ran my best of race finishing the Ennerdale in four hours forty-eight minutes. And again, later in 2015, it was this race that helped me win the vet-50 British Championship. And I sat there alone in the Ennerdale Car Park last Thursday morning feeling weak and achey and unworthy, trying to cajole myself to set off on a recce. Slowly I jogged along by the glass calm lake then put my legs to work up the steep grass of Great Bourne. Easing out along the ridge over Red Pike and on, remembering old trods, refilling my water bottle at the oasis of heather-hugged Blackbeck Tarn. Green Gable – half way – a marmite sandwich. Slowly- slowly, just keep picking my feet over rocks and scree, just keep trotting through the sunshine, the fresh air, the peace. Eventually I reached Pilar in longer than the whole thing had taken me in former times. I don’t know how I was that person, was it really me? But God – how I still love Pillar. I was on my Pillar and the day was glorious. My ankles were fired with pain, my feet felt like they had been run over by a bus. I wasn’t bad from the knees upwards though. I felt like an animal in its habitat, a funny kind of aging fell creature. This was right, this was good, there’s always pain, it doesn’t matter.

Because of forestry logging I lost the trod up Crag Fell. This fell where I used to know every tussock. Details of memories fade over time but feelings stay fresh. I’d made it all the way round, slowly. And even if I don’t make the start line or the finish line on June 12th it has already been worth it to have the thought – well maybe I can, maybe I will. I will try, and if my body says no, then I’m sorry. But whatever happens I know these fells will always keep me alive in one way or another. It is when I am at my weakest that I need them most. Because they are my strength.