Lesson One – age seven years, in Northumberland.
The most triumphant day in all my life. Glorious sunshine beaming down on the North Sea. My mother's hands supported me in the water, while I learnt the strokes. Then, when the time was right, she let go and I was swimming with no arm bands or rubber ring, head-up breast stroke into the waves. The amazing feeling of rise as a swell came up from underneath my weightless body. It was the day that I leaned that the world is fantastic.

Lesson Two – forty-six years later in a small indoor pool.
I wanted finally to get beyond the feeling of panic whenever my head was underwater. I wanted to be a real swimmer and learn front crawl. My teacher's hands supported me in the water, while I learnt the strokes. Suddenly I stood up and cried for no reason that I could fathom. My body had remembered something. Then I got on with it and managed a whole length.

Lesson Three – another year later in Derwentwater.
It was ten days after an accident which gave me 3 big pelvic fractures, broken ribs and a bleed into my left lung. The painstaking palaver of getting on a wetsuit and going to the lakeshore on crutches was worth it. I swam my first mile of front crawl, alone in the calm cool lake with mist rising and morning sun filtering through. The water became a safe place where pain dissolved. 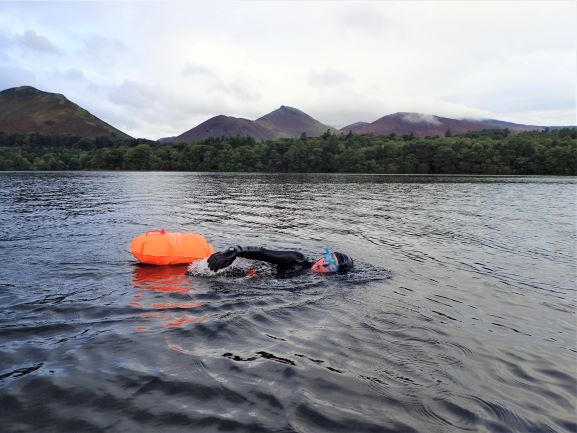 Then - Phase two of swimming evolution - no wetsuits all year round!

Lesson Four – another couple of years later in Assynt, NW Highlands.
My friend broke the February ice on a small Scottish Loch for a swim on her 72nd birthday. I gingerly followed her in. I realised she is actually a guru and I've been swimming in the slipstream of her wisdom for years. She was right, it was good to go in in just a costume and a lot less trouble getting ready. The next day we swam in the Atlantic Ocean at Achmelvich beach. I went first and suddenly a huge breaker charged out of nowhere. The calm blue-green turned frothy and white. I was dragged under and emerged, sand grazed and shaken. I lost my hat.

Lesson Five – eight months later, November 2020 back at Derwentwater.
I had not swum for ages. The guru arrived intent on going in and said it was definitely better without a wetsuit. Well maybe not better just very different, a really different experience. I managed ten strokes gasping with the cold. I enjoyed the tingling.

Lesson Six – same place and all the days since.
Almost every day before breakfast I go in, as the guru advises, in a swimming costume, neoprene gloves and socks, and woolly hat. Some mornings accompanied by the sound of creaking icebergs and pushing through the frozen surface like shattering panes of glass. More than once my costume has frozen to my torso on the walk up the shore. But I feel fine, I feel great. That's the thing about swimming it is always surprising. It reminds me I am alright when I think I'm not. How can you be alright swimming in ice-cold water, surrounded by snow clad fells, brooding swans and calling geese.? How can you not? Every swim is like suddenly understanding the world afresh. Eureka! That's a word nobody could have invented on dry land. 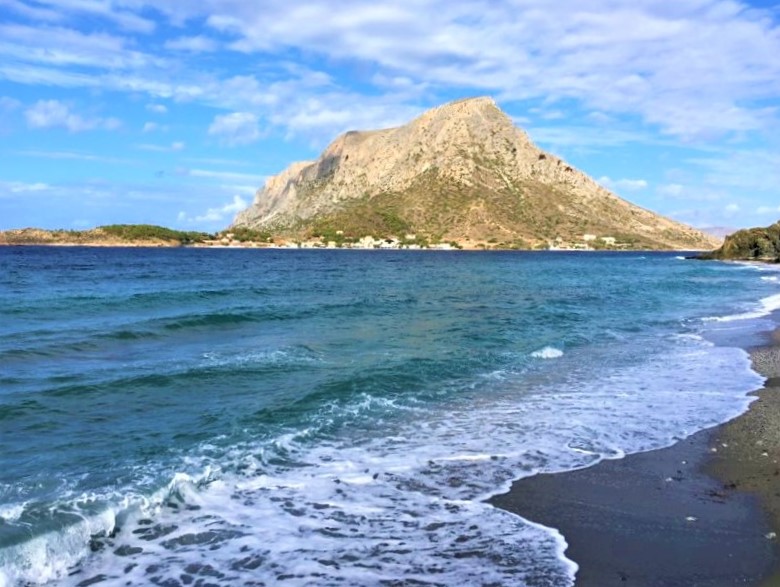 The Swim – a short story about a Grecian swim, adapted from my book Is It Serious? and pictured above.

With gratitude to Claire Windle, my comrade.

We stood knee deep at the ocean's green edge. Then, as comrades we plunged into the blue beyond. I'd never swum an open sea crossing and this one was a mile between two islands. I was longing to know what looking into depths like that would feel like. It was also a kind of race as we had no wetsuits and needed to make it before cold would make my less than expert stroke useless. I had learnt the slow, calming way of breathing out under water. Calming was needed to face this blue. I thought it might be beautiful but had not realized it would be unfathomable.

Things are not what they seem but just hints of themselves. You can say the word blue. You can use a blue pen, wear a blue coat or see a blue sky but this was a blue you could drown in and its mystery made my heart beat harder. I was in something overwhelming. It wasn't like Derwentwater where I knew all the landmarks and even when I could not see the bottom I knew exactly when to expect it to appear.

Cold. Yes, I was cold when we got to the other side. And stumbled out to warm, dry towel held by friend. A haven - safe. We cannot be both fully alive and truly safe at the same time
– I know that. But there are moments when I relish the illusion. 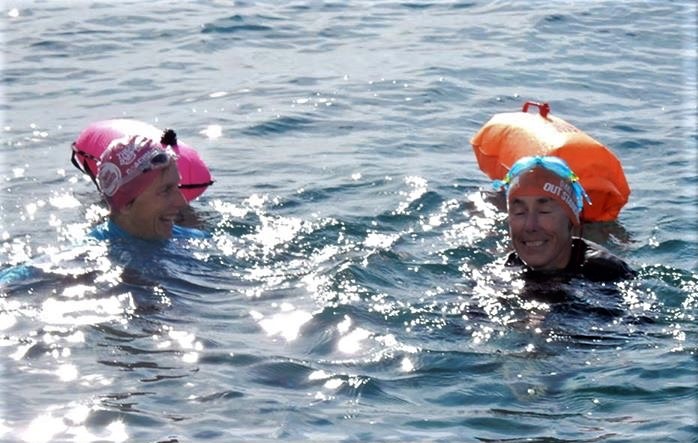